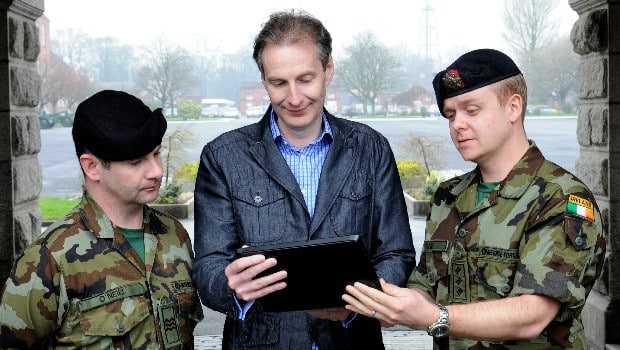 The Defence Forces and Spanish Point have been awarded IT Professional Team of the Year at the 2015 Irish Tech Excellence Awards which took place in The Ballsbridge Hotel, Dublin.

The Irish Tech Excellence Awards are Ireland’s principal badge of honour for tech professionals in the IT industry. The IT Professional Team of the Year award recognises a team that demonstrated outstanding management of technology project in their enterprise.

The award recognises the technical excellence of the Defence Forces and Spanish Point team in designing and delivering the IKON system that delivers information, knowledge, document and records management for all 9,500 members of Defence Forces.

The enterprise-wide system which consists of a fully integrated web platform is improving collaboration and providing information, knowledge, document and records management. The solution is significantly improving operational effectiveness for all formations and units of the Defence Forces.

The Defence Forces (DF) operates in an environment in which information is a primary resource, and therefore a key enabler for the conduct of operations. The Defence Forces recognised the need to address Information and Knowledge Management in response to the rapidly changing information requirements which impact on a modern professional military organisation.

In 2008 the DF began extensive research around the area of information sharing and knowledge management. After years of education and what has been recognised internationally as industry leading research, the Defence Forces are implementing the ICT element of their project using Microsoft SharePoint 2013, Microsoft SQL 2012 and the Spanish Point SharePoint team.

Spanish Point Technologies Ltd., a Microsoft Certified Gold Partner, was selected as the implementation partner after a public tender process.

This solution enables members of the Defence Forces to communicate effectively, from any DF location and share information and knowledge on a single unified platform. It will considerably increase productivity and deliver significant cost-savings by improving the access to timely information and therefore improving the decision making capabilities of key personnel within the organisation. This will deliver the DF’s stated IKM policy goal of “enhanced information exploitation and information superiority using a collaborative, information-sharing, networked environment.”

Members of the Defence Forces, Colonel Des Bergin and Comdt Barry Byrne were present to accept the award. They were accompanied by Spanish Point Technologies’ CEO, Donal Cullen.​